Cleantech — Out of Grubby Tech

Contributed by M. B. Beck

This word “Rainbow”, I have found, bothers some of us. How then does one use it, when it is meant as it means — all the colors of the rainbow? One simply uses it! And that I shall do, for this reason. We originally had Growing Green, for “environmentally friendly”; then Growing Blue, for “water-sensitive” economic growth. But if Blue and Green, why not Growing Yellow, for nitrogen-sensitive economic growth; or then again, Growing Red, say, for phosphorus-sensitive growth? To encompass all the elements intermingled in recovering the bounty of commodities from the post-consumption resource flows of urban metabolism, only Growing Rainbow could suffice — as I see it.

The International Water Association (IWA) is home to many specialist technical groups. It has now gathered the work of some of these groups around an Association-wide program on Nutrient Resource Recovery. This can genuinely claim to be a change of paradigm; one of those transformative changes of which we hear so much these days. It is a change from viewing nutrients — primarily nitrogen (N) and phosphorus (P), but also carbon (C) species — as pollutants to be eliminated from sewage in the process of wastewater treatment, to these same nutrients as resources to be gainfully recovered.

Out of grubbytech springs forth cleantech.

Likewise in this past year (2013), and in response to a member survey, the IWA Specialist Group on Sustainability in the Water Sector has launched five Working Groups, on:

Here now is not a word with pre-occupying popular associations, but one that has become somewhat overworked: “nexus”. As intended here, it means the irreducible complex of resources and services to which each of us requires access for survival, well-being, even prosperity: water; food; energy; ecosystem services; what we may consider a benign climate; sanitation; and the productive recycling of post-consumption resources, among others. When this notion of the nexus originally shot to prominence, water (in particular, its supply) was privileged, as primus inter pares. The trouble with this, I argue, is that water supply can come to be seen as too much of the be all and end all. The nexus is what it is: irreducibly complex. It is not entirely strung together by a single-resource gossamer (water). It is rather a web of intimately intertwined, multi-stranded resource flows.

It is not always helpful to insist on sub-dividing the nexus into its conventional constituent parts, of the water, food, and energy sectors. As we have said before, “Climate Change Drives Market for Urine Separating Toilets” is healthy training for our intellectual gymnastics. It scrambles traditional categorizations. Moreover, no matter how low might be our low-C futures, people will still have to eat. And not to put too fine a point on it, cities, as we have also observed elsewhere, are confined human feeding operations (CHFOs), to go alongside the CAFOs (Confined Animal Feeding Operations) of intensive livestock production and industrialized agriculture. Urine is rich in the cinderella resources of N and P. There are profits to be had from recovering post-consumption commodities from CHFOs and CAFOs — and quite a lot more profit from this latter, as the BeCleantech Nexus Impact Analysis shows.

BeCleantech (our “sister” website) is about synergy in innovation. It matters, we believe (at CFG), how an innovation in one location in the web of the nexus influences the success (or failure) of another innovation elsewhere. A technology assessed for its commercial promise in clinical isolation from the rest of the complex web of a city’s several components of infrastructure (in which that technology is to sit), may not look as promising when assessed in situ, when the technology is not abstracted from its complex context.

For example, nitrogen species are better recovered upstream in the network of post-consumption resource flows, phosphorus species better downstream. Success in the former may undermine the capacity for success in the latter. It makes quite a difference whether a business is addressing the CAFO or CHFO market, or both — as much as $100B each year, in fact. Phosphorus recovery from poultry litter is an especially promising segment of the market.

On the other hand, more nitrogen enters Atlanta and London in the pre-consumption (pre-combustion) resource flow of natural gas than in food. Smart business models and piggy-backing water-sector innovations onto low-C energy policies may offer the best immediate prospects for breakthroughs in Growing Rainbow. Such breakthroughs, however, may be stifled for as long as shale gas/oil discoveries continue apace or if marine extraction of phosphorus ores gains a commercially competitive edge. What is happening in the energy and mining sectors matters for assessing innovations in the water sector.

More healthy mental gymnastics are to be had; more insights too. Ones that are not necessarily immediately obvious in the complex setting of the nexus; ones born indeed of some new “nexus thinking” — but really, in truth, just some plain old, albeit refurbished (perhaps), systems thinking.

Your Organization, Your Participation

The “personalized” global markets of just 18 companies are estimated in the “Nutrient Recovery” Nexus Innovation Impact Analysis. You can see most of them in the figure. Your organization could be featured in future editions of these analyses. You are most welcome to visit the BeCleantech website to enter your organization’s data. 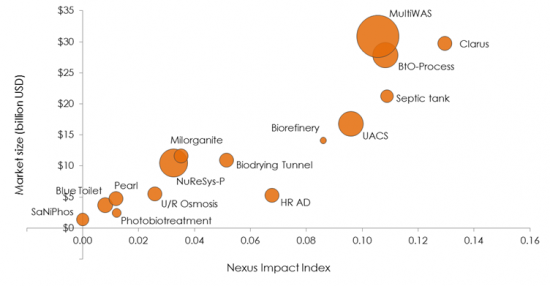 Responses to “Cleantech — Out of Grubby Tech”