Re-engineering Cities as Forces for Good in the Environment 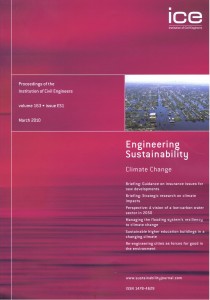 Climate change will increasingly influence the behavior of cities, their infrastructures, the surrounding environments and, of course, individuals within the city. The central concern of this paper is therefore that of exploring how the pulse of the city-watershed system reflects these influences of climate change and whether such a metric might be especially insightful in shaping policies for re-engineering urban infrastructures in a more sustainable manner and, in particular, for enabling the city to act as a force for good in its environment.  This is inspired by the challenge of turning on its head the popular perception of cities as environmental “bads”, so it might in due course become the case that a man-induced (and generally unwelcomed) changing climate may yet even enhance the city’s opportunities to act as a force for good in its environment. The paper elaborates on a simulation study, using a case study of the city of Atlanta within the Upper Chattahoochee watershed, Georgia, USA, showing how it is possible to re-engineer the water infrastructure of a city so as to restore aquatic ecosystem services in a watershed.